There’s a huge cloud of shame around art and business being seen as bedfellows. -Amanda Palmer

Inspiration can come from the most peculiar of places. I find most of my inspiration through music. I’m not a musician and I don’t even work in the music industry but for me, it seeps in everywhere. It might be because I’m originally from the musical city of Liverpool, it might be because music has always been a huge part of my life or it may be because music really is a big deal. And a thing everybody can learn from. Bear with me. First of all, let’s talk about Amanda Palmer. Cabaret Rock queen, living statue, controversy magnet and most recently, crowdfunder extraordinaire. Amanda Palmer has had an interesting career to say the very least and I’m convinced that her attitude towards not only her fans but to the music industry in general is entirely revolutionary and comes with a lot of important lessons.

What did Amanda Palmer do?

Amanda Palmer, first of all begged her label to drop her after realising their relationship was going nowhere. Roadrunner Records has had trouble since but at the time, it was one of the biggest alternative labels in the world and to not only speak against such a force but also suffer from a drop in pay.. that takes serious balls. Or a good business mind. Amanda Palmer started out as a living statue. She knows how to make a living from performing, she knows how to connect with people and she knows that there’s no shame in asking for help. Being a street performer is of course, a form of begging. And one that provided her with the skills and confidence needed to do what she did in 2012.. She asked for help. She asked her fans to help her raise money towards the promotion of her album and subsequent tour. This was a controversial move and one that seemed widely misunderstood. Amanda Palmer was asking for help, not demanding and her fans (such as myself) didn’t feel anything but excited! Not only were we part of the success of a great album, we were to thank for the tour and the rewards included hour parties with Ms Palmer herself. There was no loss here- it was, in some cases, just a glorified pre-order and in other cases, the once in a lifetime opportunity to hang out with a musician we adored. Amanda Palmer asked for $100k and she got over $1 million. It was incredible. So many people came together to celebrate, support and take on an exciting new venture with the fearless artist. The tour was a huge success and because of the amount of money raised, Amanda Palmer and the Grand Theft Orchestra were able to do a world tour. This was all due to fans and artists working together! There was no need for a record label and the overwhelming success proved that maybe, just maybe, record labels were becoming redundant. Amanda Palmer now offers all the music that she can for free. And encourages sharing the music she creates even if she gets no profit. Of course, she accepts money but if you pay $1 for her album, she doesn’t mind. If you pay nothing, she doesn’t mind. It’s all about the music for her, money comes second.

And what exactly can record labels do to tackle that kind of attitude? 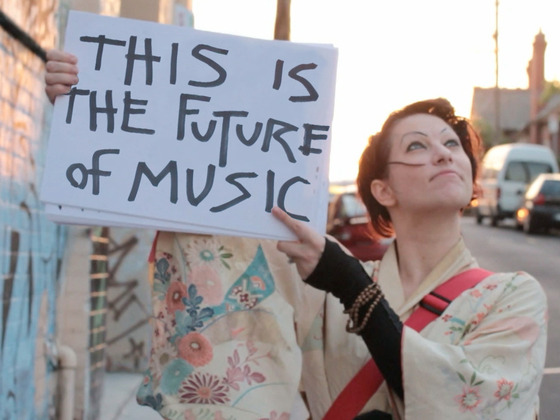 Put simply, U2 put their new album on every iPhone for free last week. Whether users wanted it or not, it was there. And again, this was controversial. Some people don’t like U2, some people wanted to know why the hell Apple didn’t choose to promote a smaller artist instead (which would be brilliant but the reaction I imagine would be pretty underwhelming) and some thought it was Bono being smug as ever. It was a bold move by the band and unlike Amanda Palmer… there was no asking involved. There was no consent to put this album into 500 million music libraries. And it wasn’t free. It actually reportedly costed Apple $100 million. U2 have always aspired to be huge and this isn’t an example of them suddenly becoming philanthropists, it’s an example of a band realising that they’re maybe not as relevant as they used to be and realising that with the likes of Amanda Palmer, Radiohead etc paving the way… they’re in a brand new musical world. One in which the fans matter.

What can we learn from this?

U2, on the surface, appear to be embracing the new musical climate but ultimately, they accepted a lot of money for a slightly underhand, dirty marketing technique that disappointed a lot of people.

Amanda Palmer was honest. She wanted money to fund her album, the surrounding marketing materials and the tour. Yeah, a few people were frustrated but all together, she received $1 million. So she did something right. She explored the opportunities. She didn’t complain about the state of the music industry, she didn’t blame illegal downloading… she used the tools she knew she had to open the album creating and promoting process to anybody that wanted to get involved. For every time Amanda Palmer recognised the importance of having fans, she sold a ticket, she sold an album, somebody signed up to her newsletter. Her campaign was an overall success, she received almost 1000% the amount requested, she toured the world and most importantly, she formed bonds and friendships that resulted in the creation of  unforgettable experiences for those fans.

The lesson for small businesses is… go the extra mile. Take the extra steps. Go outside of the lines and find a way to make your business stand out from the rest. It may mean more work but nothing good comes easily. There’s no reason to not connect, to not be honest about your intentions. People don’t value dishonesty, even from businesses, even from musicians and we’ve seen this time and time again.